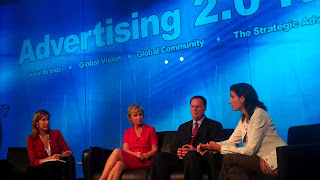 Yes, journalism and marketing are converging, sharing the same terms and concepts. Editorial icon Tina Brown, journalist-turned-entrepreneur John Harris of the Politico and Tina Sharkey of BabyCenter were very comfortable at Digital Hollywood’s Advertising 2.0 conference today talking up the value to advertisers of their sites, and their willingness to go well beyond the banner ad to try to integrate advertising in more creative and interesting ways (though Brown and Harris were careful point out that advertising initiatives were labeled as such). “The muscles you use on the editorial side,” help with advertising, Harris said, in helping a message “break through” to the audience. “We see the journalistic and advertising sides as two forces galloping together.”

“There was a time when advertising staff was not allowed to step into the newsroom,” observed moderator Sarah Ellison of The Wall Street Journal. “Obviously we’ve come a very long way from that point.” Brown noted that in the magazine world, as editor of such leading publications as Vanity Fair and The New Yorker, she was always comfortable working with the publisher to “create an environment where advertisers want to be.”

But she seemed to take umbrage at the idea of marketers trying to do their own journalism (such as this recent Pepsi-led project for Internet week, for which I was editor in chief). To them, “I would say good luck,” Brown said, defending journalism and saying it takes real skill to practice it, and to edit it. (Assuming, it seemed that those who practice it on behalf of Pepsi are not journalists.) I had asked her how she would convince an advertiser to put ads on her site, if they could go to their target audience directly without her Daily Beast as an interlocutor. Sharkey, who is not and has not been a journalist, acknowledged that it was all a mishmash, very confusing with “marketers as publishers, publishers are marketers, brfands are agencies, agencies are brands ... it’s like ‘Who’s on First.’ “
Posted by Dorian Benkoil at 6/10/2009 09:58:00 PM