Earlier, I saw the AP having trouble if a group of Ohio papers didn't use it. Now, Jay Rosen points us to to a Wired pickup that links to this story from the MinnPost about Minneapolis Star Tribune sending the AP the requisite two-year notice that it intends to cancel. This after five other papers did so. Now, this doesn't mean that the Strib will necessarily drop AP. Sending notice ahead of a deadline is a common tactic. In fact, some lawyers routinely send out cancellation notices as a matter of course, to they can cancel in the event they do actually wish to cancel. And, Rosen also notes, The Spokesman Review is challenging the two-year cancellation notice requirement.

Nevertheless, it has for decades been a "given" that a U.S. newspaper would take the AP as a core component or important supplement of its news coverage. The MinnPost writer, David Brauer, talks of the damage to the area's news gathering if the AP loses the Star Tribune's participation (and fees). But he also notes that papers could use that money to pay for more of their own reporting:

If AP gets less cash and copy from the Strib and cuts its local presence, Minnesota’s news ecosystem could take a big hit. The wire service’s copy fleshes out local papers big and small; a diminished AP weakens a key line of defense for cash-strapped newsrooms.

Then again, non-metro editors around the nation were among the first to give AP notice; most said they’d rather save the coin for their own staffers (even as their publishers were thinking cash flow)

A Newsweek editor once quipped in an editorial meeting that "if we have two examples, it's a trend, three, a cover story." Well, now we have at least a half-dozen.
Posted by Dorian Benkoil at 8/29/2008 10:50:00 AM No comments:

I’m teaching a course in Digital Marketing this Fall at Baruch (my biz school alma mater), although the course is formally titled “Internet Marketing.” The department chair asked me to justify the name change to the school’s administration, so I wrote the following. It’s hard for me to conceive of a course for a marketer (as opposed to a technologist) that would consider the Web or Internet in isolation, and separately teach “digital” marketing.

Internet Marketing is a phrase that in 2008 sounds almost quaint. Marketing strategists today need to engage consumers where they are, and that is increasingly on a diverse array of digital devices that can serve as highly personal touchpoints. The marketer might use Twitter, a mobile text messaging and Web-based application through which Dell by February had sold a reported $500,000 worth of equipment. He or she might integrate the Web and mobile devices, as in the recent Adidas campaign, which sent text links to mobile phone browsers that lead to a website also available via computers through which users could register for callbacks to phones from NBA stars. Or perhaps create viral YouTube videos watched on an Apple TV or Netflix device hooked to a television, a laptop computer linked through the Internet or an iPhone on a 3G cellphone network. A consumer product branding campaign might employ traditional banner ads on Web-based portals or search engines.

Rather than focus on the platform, today’s marketer needs to concentrate on where to cost effectively engage the market. And any marketing executive hoping to work as a cutting edge strategist must understand the importance of integrating all available digital tools. To consider the Internet in a vacuum and disregard the deep interrelation of various digital channels would ignore current realities, do a disservice to students and deny them the chance to study the latest research and industry wisdom.

From the IBM report "The end of advertising as we know it," discussing why advertising agencies and marketers in general will have to get more used to the idea of users creating advertising.

If the rise of user-generated advertising seems "outlandish," consider how far-fetched the idea of a consumer generated encyclopedia was only a few years ago.

As always, it behooves content creators (journalists, others) to look at what the agencies are doing, or being told to do, what the trends are. Use of technologies to create and engage.
Posted by Dorian Benkoil at 8/18/2008 10:49:00 AM No comments: 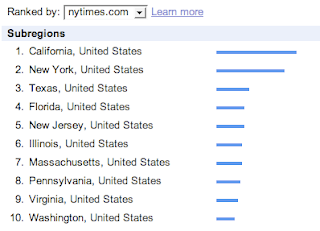 ... or at least, according to Google Trends. Like I've said, sometimes when you're poking around for other work, you find curious stats. Like, today, if you search "NYTimes.com" in Google Trends, it shows that more visits come from California than New York.
Posted by Dorian Benkoil at 8/12/2008 03:30:00 PM 1 comment:

HP: 9 Terrbytes of Video Per Month

If anyone doubts that corporate video can get an audience: Hewlett Packard monthly serves nine terrabytes, equal to millions and millions of views, according to Daniel Webster of The Feedroom, which serves the video. "You have to have lots of content and refresh it constantly," he notes. And, for HP, it's a marketing cost, covered in part by the money they save using the Internet to distribute video that used to cost many millions more to send around by satellite. Much of this is internal video. He was speaking at the Web 2.0 conference.
Posted by Dorian Benkoil at 8/07/2008 04:07:00 PM No comments:

1. keeping your production costs low
2. marketing marketing and marketing -- and thinking of marketing in a very traditional test, rinse, repeat kind of way
3. having something else to sell besides the video. IE, your services as a live performer

These from Jennie Bourne, author, Taking Your Video to the Web, at the Web 2.0 conference at Pace University. She gave a few examples. She talked about the success of the Coke/Mentos video (currently at more than 7 million views on YouTube, and more on other platforms). “What’s behind that is some very careful thinking about marketing, and the audience they were trying to reach. They studied everything that’s successful on the Web to come up with and create a successful viral video .They looked at what the content was, whether it had physical action. Whether it was elaborately produced. Whether it had more than one camera. And step by step they put it together ... They did it hundreds of times to get it right.”

To make money from it they put it on Revver, which shares revenues with producers, and also used it as a way to promote their live act, which ultimately is paying them more than the video ever did, she says. Added moderator Dave Burstein of DSL Prime: “They went from semi-employed circus performers to more work than they could handle, at Vegas and elsewhere.”

A counter example Bourne gave is from the producers of “The All for Nots.” They had a show called “The Burg,” which got sponsorship. They then raised their production values, increasing the cost of the show, but when they lost sponsorship were unable to continue it, because it cost them too much. The current site site is begging for more viewers to try to get sponsorship.
Posted by Dorian Benkoil at 8/07/2008 03:24:00 PM No comments:

The Week: Aggregator or Analyzer?

The Week’s Steven Kotok today spent a lot of time on Naked Media insisting that the magazine is not just an aggregator but is really about opinion and intelligence. That they’re more pickers and choosers than smart analyzers is a common perception. From today’s WSJ:

The Week condenses commentary on the world's news into small, easily digestible bites.

Fellow show guest and media critic Michael Wolff also called the publication a “picker” of content -- in a similar way to his own Newser.com Other Wolff revelations: Newser.com plans absolutely no original content, ever. It will be profitable next year, if all goes as now. They’ll pass 1 million monthly uniques soon.

I pressed a lot on whether something like Newser can really get traction and hold on. Wolff insists there’s a great mass of people who will always be there, and want a branded news site that puts together a wide swathe of news. I lean more towards the belief that fragmentation is leading to niches of “vertical” coverage, and that those who want news of various types or on various subjects will assemble their own aggregations in a feed reader or similar. They can then look at their favorite sports, local news, international news, and so on.

Love it. Parody. Even if it's 1 million places on the Web already:

And who cares if someone else wrote it for her (which may be the case)? She had the smarts to do it.

(It's a video of Paris in her revealing bathing suit talking about John McCain, energy policy -- making a very sensible proposal of having BOTH offshore drilling a la McCain AND conservation policy, a la Obama -- and where to get a tan. Oh, and thinking Rianna for her vice president, and maybe painting the White House pink.
Posted by Dorian Benkoil at 8/07/2008 02:18:00 PM No comments:

We'll ask them all about entrepreneurship, why the world needs more news aggregation online and in print, where and how you can charge for content and, of course, some of the more controversial statements Wolff has made. Due to the Texas storms and a family health issue, Patrick Spain, previously scheduled, won't be able to make it.
Posted by Dorian Benkoil at 8/06/2008 01:45:00 PM No comments: