In the Social Journalism Educators group on Facebook (which I believe is invite only), @emilybell of Columbia U's Tow Center alludes to a great point: Understanding the differences among social media is a core piece of knowledge, and how use them in a given situation a core skill. I've used Facebook to reach out to certain types (for example, suburban mothers of school-age children for one hyper-local news project), Twitter and LinkedIn for other groups or purposes. Am still learning Google -- yet another one to learn -- which at this point seems biggest among the tech influencers or 'digerati.


There's also what I might call the "serendipity factor." Sometimes you discover that an unexpected network is big among your community. With PBS MediaShift and a NY local tech blog, for example, we've seen the occasional spike in traffic from StumbleUpon, a service we had not previously concentrated on. I have even seen some spikes in activity from niche  networks, such as AllTop (which if memory serves is run by uber-marketer Guy Kawasaki). It also changes over time, so it's important to pay attention to the flow, and the changes in use of and abilities of the tools. When Google+ really opens up, and when it releases an API, we'll probably see spikes there. Here's a project I'd like to work on and contribute to: A tool that has the intelligence to do a lot of this for you: IE, it knows that Google+ will work best in this instance, Facebook in that, Twitter in another. I just plug in my content or my need, and the tool decides where and how to send it. We're seeing some nascent attempts (SocialFlow, Measured Voice) but none that yet quite get it right and load balance among all the social media and are able to quickly incorporate the unexpected spikes in new networks.
Posted by Dorian Benkoil at 8/15/2011 11:37:00 AM No comments:

Here's a bit of proof that publishers are thinking beyond the iPad. Kindle, shortly after my previous post  giving market share reasons for moving beyond the iPad, came out with a Web app version of its interface. The pictures below show a key difference, and herald a battle between Apple and media app makers. The top image is a screen grab of the Kindle iPad app. Below, the Web app. Can you spot the crucial difference?

Give it a shot before reading on. Click on the image if you want it larger. OK, here's my answer SPOILER ALERT: The key difference is the "Kindle Store" button in the top right of the Web app version. Like the Financial Times before it, Amazon has decided to try to entice users to access its materials on the Web. 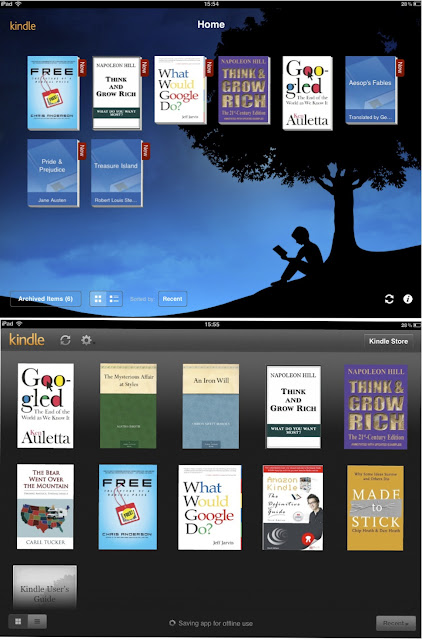 By doing so, Kindle avoids Apple's prohibition on having a direct "buy" button to get books from within an Apple-approved app (other than Apple's own iBooks). People go to what is actually a Web site to the get the Kindle Web app, rather than to Apple's iTunes store.  And when they get the app, they get a little button popping up (similar to the FT's) asking them to install Kindle "Cloud Reader" on their home screens. That creates a button much like any app button (see the image at bottom of this post to see how the FT's looks). 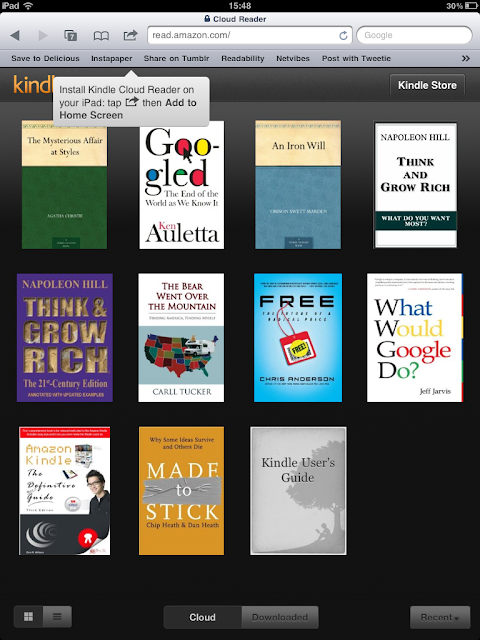 If people start using the Web app, Kindle can sell more books directly from iPad users and get around any other onerous restrictions Apple may place. (Yes, Apple could, I suppose, sniff for Web apps on its devices and start to defeat them. But that would likely start to chip away at some of the love Apple gets from users of its tablets and spur at least incremental sales of other, more open ones trying to get traction, such as the Acer tablet released today in the latest Android Honeycomb standard.)

Kindle creator Amazon might also another motive beyond direct sales getting its own user data from people using the app, rather than ceding it to Apple, which doesn't share. Plus, anyone who uses a Web app gets to keep 100% of the revenue they make, rather than giving Apple the 30% cut it takes from people who purchase apps through iTunes. (The 30% argument is applicable for FT, if not Kindle.)

The technology making this all possible is HTML5, the latest version of HTML, which when combined with other also open code like Javascript gives publishers the ability to do some pretty amazing things from within a browser such as Safari or Windows, and not have to write a device-specific app in a proprietary platform such as Apple's iOS. Yes, iPad is the dominant tablet device and will continue to be for some time. But it's not the only one. And people want to make apps that aren't beholden to the iOS operating system, ones that are more flexible, probably cheaper over time, and also give the creator more control.

The FT Web app button is shown bottom left here. It looks like an app button. 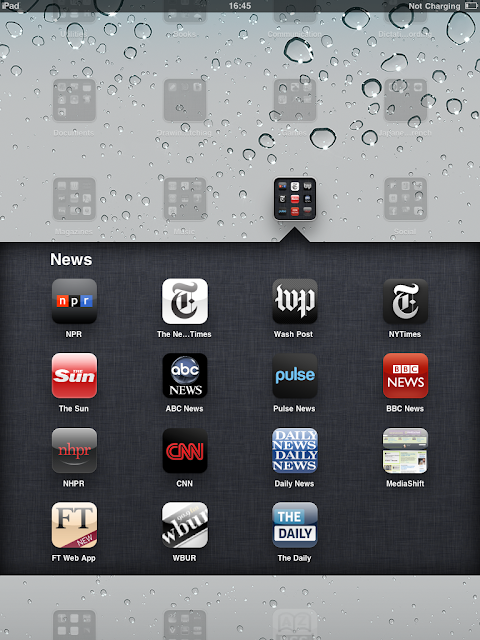 Publishers Need to Think Beyond iPad

Predicted iPad sales numbers* show that while sales are to remain strong through 2020, the tablet's market share will keep falling. And revenues will eventually decline even as unit sales keep growing.

These charts (which I created for a speech I'm giving Thursday to media execs at Columbia U.), based on the numbers, from Needham and Co. equity researchers and reported by AllThingsD, show what I mean: 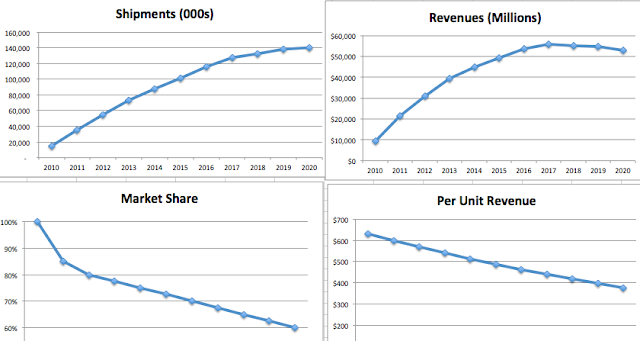 Publishers, app-makers and anyone trying to get content in front of people in our "attention economy" should pay attention. How much longer can they (well, "we") concentrate so much of their tablet efforts on the dedicated iPad platform (based on the iOS operating system), knowing that many in their intended user community will be on other devices? (I've previously noted how iPads are already a fraction of a fraction of the intended universe of content consumption.)
Even as costs for developing an app on the iPad come down from levels well into six figures, does it make sense to develop for iPad, then again for the various flavors of Android, and Windows, Blackberry, Symbian and whatever other tablet systems come out?


Publishers also need to keep up on cross-platform solutions that allow them to develop once and (perhaps with tweaks) spread their content to many devices. The digital chief of one major New York-based magazine publisher told me the company is exploring cross-platform technologies, such as HTML5, which can be shown on any browser-enabled device.

Unfortunately, HTML5 is not yet a complete standard, nor can all devices gracefully handle even the open standards for languages such as HTML and Javascript that do exist. I discovered recently that the browser on the new HP Touchpad, for example, gracefully handles only some of the publications developed by my client, Treesaver.


But the standards will solidify and get better. And vendors, some of whom already exist for smartphones, will move into the tablet arena to bridge the gap. The iPad will continue to hold sway. But publishers need to be on every screen

* The numbers Needham states are far from a sure thing. Who even knows if something Apple or someone else creates will supplant the iPad? Ideally, we'll have a device as powerful and open as a next-generation MacBook Pro in the form factor of an iPad. The iPad has, after all, spurred an entire new category and the same thing could happen again with a new device. (Intel has reportedly predicted that people by 2020 will want chips implanted rather than having to deal with pesky keyboards.)


Who, too, can really say that revenues from the devices will decline? Apple is brilliant at maintaining pricing for its machines year-over-year, adding new features, making them more sleek, giving them more speed and functionality. Yes, market pressures should force the prices down a bit. But Apple is not like other makers, whose devices tend to become commoditized over time as competitors come in. Maybe they will become more so in a post-Steve Jobs era. Plain-spoken Jobs "coach" Bill Campbell said at the recent Silicon Valley Innovation Summit that he thinks the company will go on just fine without him.
Posted by Dorian Benkoil at 8/08/2011 12:22:00 PM No comments: